Finally, after about 4 years of not traveling to London, I´ve been there again!

The last years I always missed London a lot, but as I wanted to see some new places too, I decided to focus on travels to places and cities that I haven´t seen before. But this year, as already mentioned in my "How to plan your perfect London vacation" post, I travelled there to visit a family member. 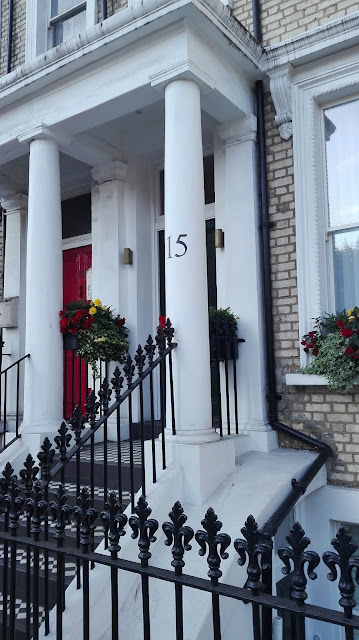 I travelled to London twice this summer - once in July and once in August. I can definitly say that I enjoyed my time there A  LOT. This city is so magical for me and I love that not matter how long you are there and how often you´ve been there, you will always find something new to discover. Because of my 2 vacations in London, I will share two London travel diarys with you.

At my first stay there I mostly visited the sights which you have to pay for, so the typical tourist sights. Because even though I have already seen most of them, I wanted to visit them again because my last visit was several years ago.


We booked a flight to London Gatwick with FlyLevel, because of the good price and the great flight times. I was really happy with my flight experience with them, because the seating rows offered a lot of space in comparisson to other cheap airlines and they also had USB ports so I could charge my phone, which isn´t standard in short distance aircrafts I think. I would definitly book a flight with them again. 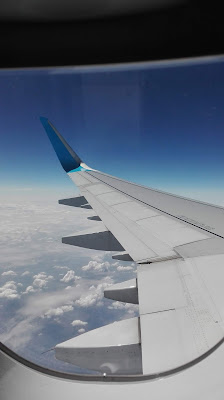 After our departure we took the Southern Railway train to London Victoria and then we took the underground to our hotel. We already bought our Oyster Cards at the airport, therefore we didn´t have to wait at Victoria to get them.

The first thing we did in London was having Lunch, because we were super hungry. We decided to spontaneous eat at a Pub, but sadly this pub was a dissappointment, as the prices were high and the meals very tiny. 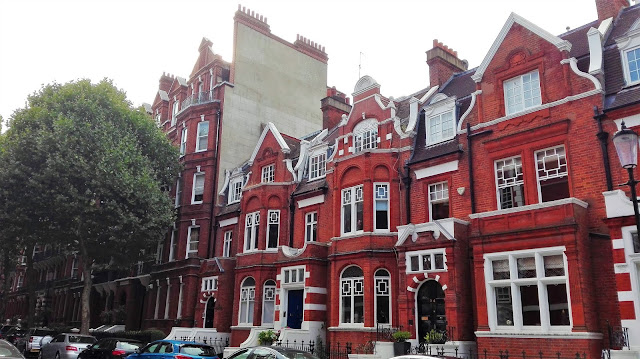 After checking in at our hotel (read more about the hotel we stayed at in my last London blogpost - here) we took the underground to Knightsbridge and visited Harrods. This famous department store is a must see for me when I am in London, because of the beautiful architecture inside, the different souvenirs and the christmas shop inside, because I love everything with a christmas theme. 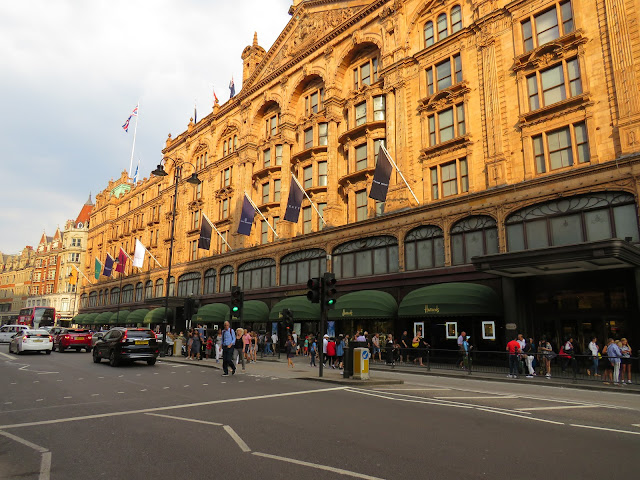 Our next stop was Westminster Pier where we enjoyed the sun and also wanted to do a boat tour at the Thames river, but it was a little bit too late for that, so we walked to Waterloo underground station. We also had dinner there, because we were already extremely hungry.

We ate dinner at "Pure" which is a nice restaurant chain who offers fresh, natural, healthy food and it was super delicious. 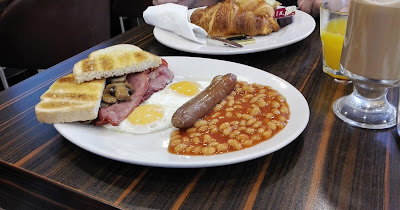 Afterwards we started at Whitehall and watched the Changing of the Horse Guards there, which starts at 11:00 a.m weekdays and at 10:00 a.m. on sundays. It´s nice to see, but also takes quite a long time where you have to wait until the next things are happening. 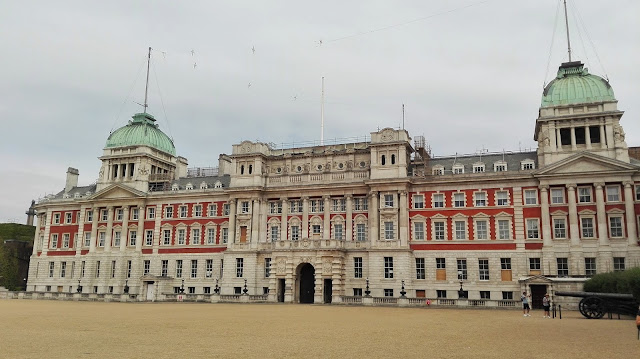 From there we walked to Buckingham Palace on The Mall, which is a street that leads from Admiralty Arch directly to Buckingham Palace to see the Changing of the Guards there. As there were so many people we sadly haven´t seen that much from the Change and decided to take a little break at St. James´s Park.


We had Lunch at a traditional pub close to the palace, because we booked a tour inside of the palace. Altough we had already purchased the tickets in advance we had to wait for a while, but not too long.

Before entering the palace you have to pass a security check and then everyone gets an audioguide. The audioguides are really cool because they also show you pictures of the mentioned places and rooms. Buckingham palace is so stunning and I already wanted to visit it, but it´s only open in summer for a few weeks, so it wasn´t open the last times that I visited London. So therefore I was super happy to see it this time and it was really breathtaking beautiful and it´s so amazing when you think that you are wandering in the rooms that normally only the Royal family and their guests are walking at. So if you are in London in summer - Go and visit Buckingham Palace! It´s absolutely worth the entry fee.

Our next stop was Covent garden where we strolled around for a while and enjoyed the nice atmosphere. It´s a market where you find luxury stores, restaurants and also a flee market. It´s definitly one of my all-time favourite places in London! 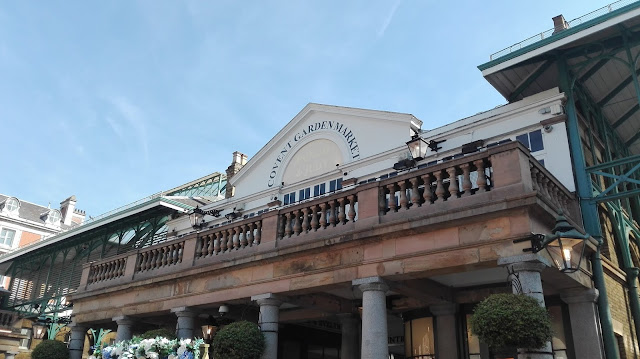 For dinner we decided to take the underground to Hammersmith and to have our meal in a nice pub there, it´s called The Hop Poles. It was super delicious, so if you stay around the Hammersmith area I can really recommend to eat there.


Afterwards we wanted to have some desert at Cream´s which is only a few steps away from the pub. They offer waffles, bubble waffles, ice cream, sundaes, crepes and more. So they have everthing that someone who has a sweet tooth can dream about. It was so, so good! I ate a bubble waffle and couldn´t get enough of it. 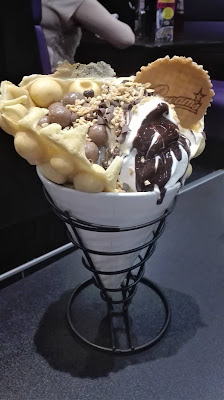 
Our 3. day in London started with a good breakfast again at the same restaurant as the day before. Then our first visited sight of the day was Madame Tussauds. I guess, the most of you know what Madame Tussauds is. It´s a place where waxworks are shown. They build wax figures from hollywood stars, important persons, and so on. 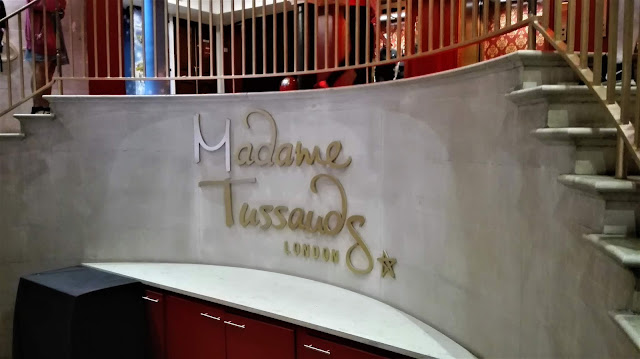 For me the only real "Madame Tussauds" is the one in London, because they also have a 5-d cinema, where they show a Marvel superheroes movie, and a "Taxi"-ride inside, where you get to see the history of London. It´s a very expensive thing to visit, but for me it is a must-do when you are in Vienna for the first time or if you haven´t been there before, because it´s super interesting and funny. If you want to go there- buy your ticket before your visit! If you don´t do that, you might have to wait very long to buy your ticket there. We booked a combination ticket for Madame Tussauds and London Eye. 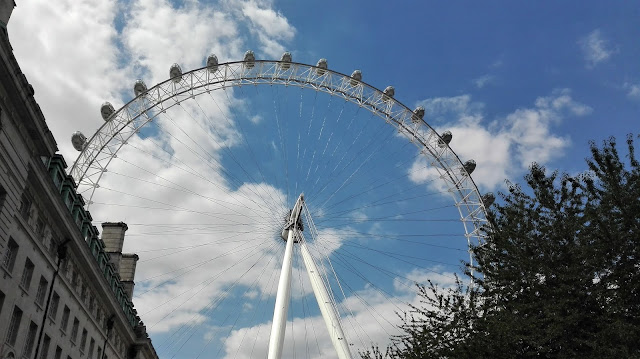 So our next stop was London Eye where we had to wait for about 2 (!) hour to get inside, which was way too long, because we already bought our tickets in advance and it was super hot that day. We were really annoyed because of that and it made our experience a little bit worse. Although the view is amazing from above, I would not visit London eye again in summer, because of the long waiting times. 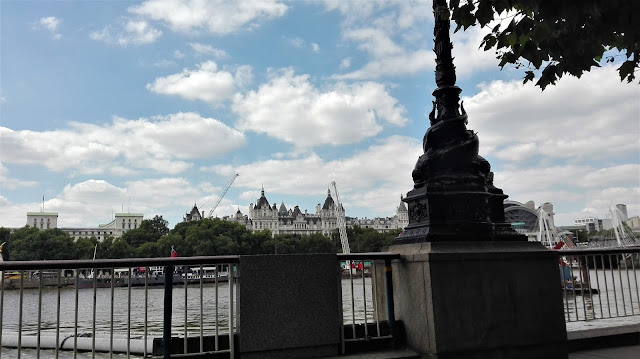 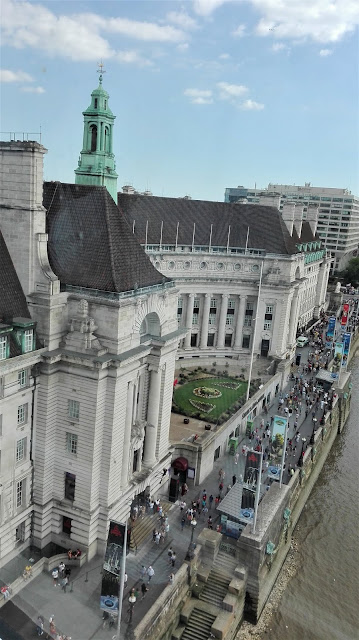 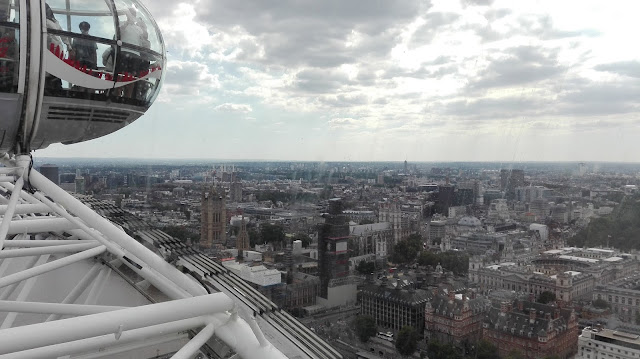 After this dissapointing experience we went for a little walk at the thames and had dinner at Earls Court /West Kensington area. 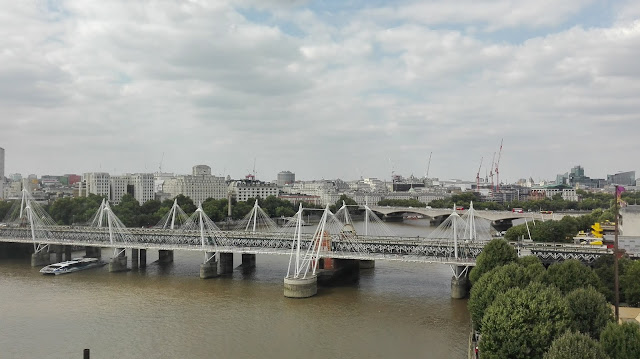 
This was our last day and we bought tickets in advance for the Tower of London. For me it is a must-see as it is part of the history of London, you get to see many interesting exhebitions there and also the popular Ravens and Beefeeter. 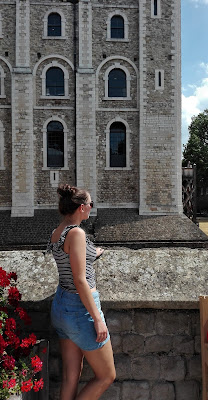 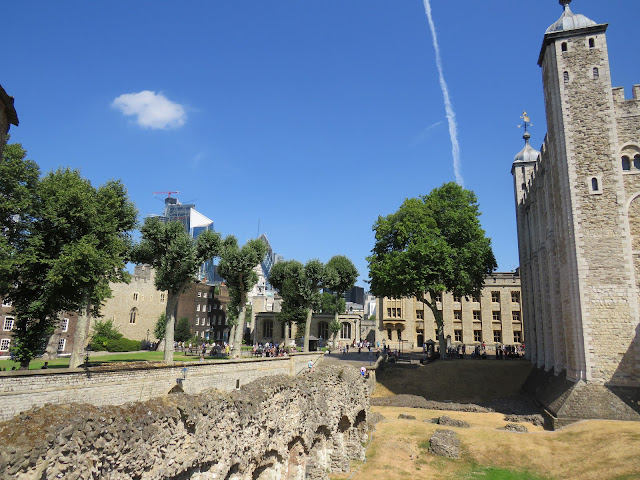 It´s one of my favourite sights and it was super nice to visit it in summer. Because of the sunny
weather we could sit there and enjoy the sun inbetween the exhebitions and the atmosphere was super nice and relaxing there. 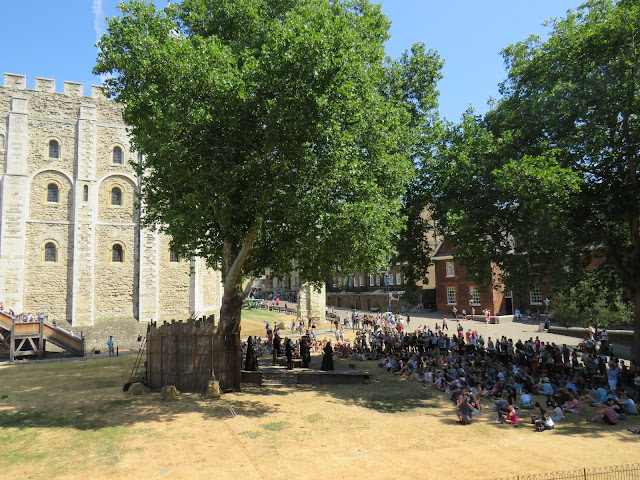 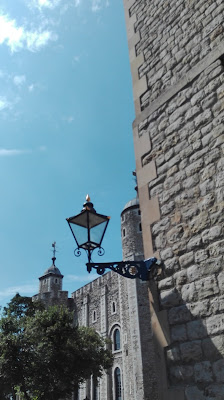 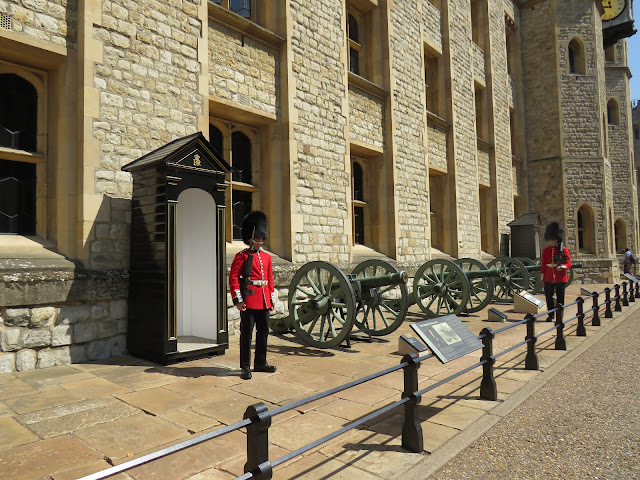 My favourite place inside is the Crown jewels exhebition, where you can marvel at the crowns, tiaras and jewellry of the Royal family and their ancestors. The waiting time was about 30 minutes to get inside, but that was totally okay for us. 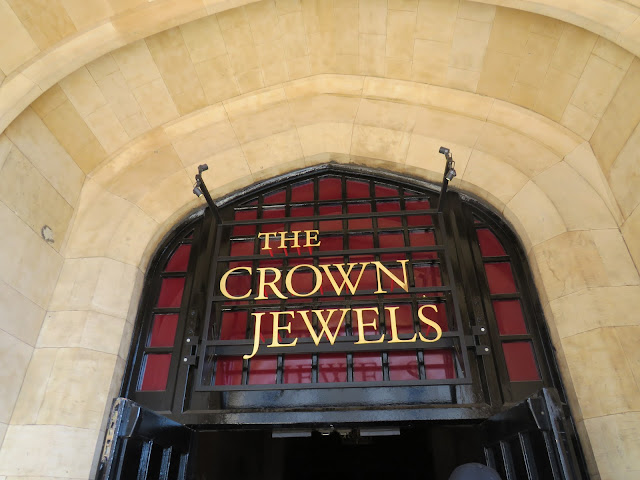 Afterwards we enjoyed the view to the thames and to the Tower Bridge. ( Definitly a must-see in London - Tower Bridge!!!). 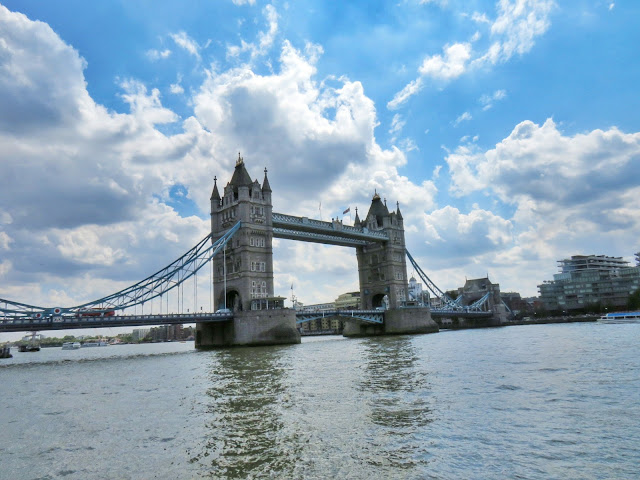 And then it was already time for us to leave London and to take the train to the airport again.

It was a super nice stay and I once again totally fell in love with this city. Luckily it wasn´t that hard to leave London as I knew that I would be back in about two weeks.

What are your must-see places in London? Have you ever been there?